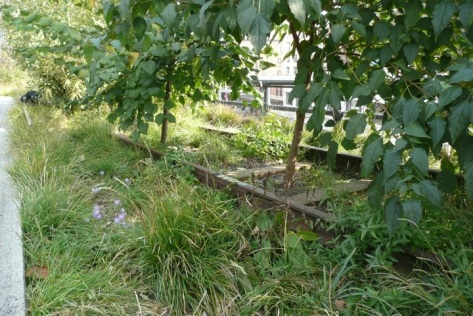 I’m counting down the hours to my return at the moment.* One last long transit will take me back to Ireland, via Heathrow. Hopefully the place will have dried out a bit by the time I get there. Should I be worried about my ground floor apartment?

I’ve been in New York for the last few days, stomping out familiar territory as I prepare to return. Although I’ve been here several times in the past, this time around I’ve tried to concentrate on doing things that I’ve never done before. Some are a little obvious, such as going to the top of the Empire State Building. Some are reminders of home, such as cosy pints in the Gingerman Pub. And some are things that I wasn’t even aware of last time I was here, such as walking the High Line.

An elevated railway converted to a linear wildflower garden that offers a unique vantage point over southwestern Manhattan, the High Line is an example of a community project that took a crumbling eyesore and turned it into something that’s not only an asset to the local communities but also a tourist attraction, luring in people who might not otherwise be inclined to visit these parts of New York. I first read about it in a National Geographic article, and that was enough to make me determined to see it and to walk it as I passed through the city.

The High Line is an example of community activism that has had a positive outcome far beyond what the threatened demolition of the line would have provided. Up in the air for the moment is the outcome of a rather more well known outburst of activism: the Occupy Wall Street movement. I’ve been coming across the offshoots of this movement as I’ve passed through the U.S., and I’ve been hearing about its spread across the wider world, but even here in New York it’s hard to say exactly what it’s achieved, or will achieve, beyond attracting attention to itself and drawing the occasional incident of police brutality.

There are a lot of theories in the media about the Occupy Wall Street movement at the moment. Many of them tend to focus on the fact that beyond protesting about the state of things, there’s little sense among the activists of a clear view of what needs to be done. It’s a fair criticism, but also inevitable: this isn’t a protest about something as simple as ending a war or preventing job losses. Ultimately, it’s about changing the way a small but very influential sector of our society works, and societal engineering is a difficult thing to plan, let alone to carry out.

I’ll be interested to see what comes of the Occupy Wall Street movement. Any number of commentators will tell you that something needs to be done if our notions of liberty and justice in society are going to be preserved in the face of an unbalanced distribution of wealth and influence, especially when those with all the money and the weight to throw around are fighting to retain what they have and perhaps gather more as the system creaks beneath them.

Occupy Wall Street may not have the answers. They’re unlikely to ever have as much focus as those who created the High Line. But they are at least asking questions and drawing attention to the need for someone in a position of power to take a longer-term view of where we’re heading. If nothing else, what they’ve done so far has reminded those with a knowledge of history that inequality tends to lead inexorably to unrest and revolution if not dealt with in a serious manner.

*Well, I was when I started this. I’m safely home now, and this is being posted late due to the habit of JFK and Heathrow airports of not avoiding gouging their customers for Internet access if they can possibly avoid it.