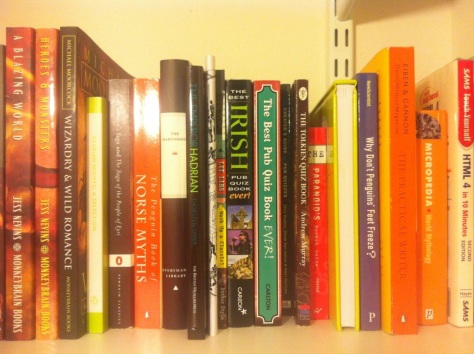 Not all of my books are for entertainment. Just most of them…

Not too much fiction this month, but plenty of history, psychology and literary advice. All of which adds up to, well, probably a need to dive into something a little more lightweight in September, what with all the craziness about to be fighting for my brain space.

In the Shadow of the Sword, Tom Holland: Holland has made a career out of examining turning points in history, and this time he dives into one of the most contentious and mystery-shrouded upheavals: the birth of Islam and the world that it overturned. He first delineates the nature of that world, then offers up a strong argument that Islam was not so much a new divine revelation as a new tapestry woven out of the threads of the old world. Covering a vast span of space and time, it remains readable despite the depth of detail, as all of Holland’s books have been, but with few strong and vivid characters, readers might struggle to find an entry point into this strange world of clashing civilisations, religions and desires for domination.

Style: The Art of Writing Well, F.L. Lucas: A classic among books on writing, yet out of print for four decades, Lucas’s book excels in practicing what it preaches: it not only tells one how to write well, but it is also written well. The modern reader will occasionally bump against the author’s viewpoint (that of a scholarly Englishman in the post-World War II world), but his advice is always easy to understand, often funny, and bolstered with examples of the finest writing in many languages. Only one of the eleven chapters delves into technical matters – the rest cover more fundamental issues of style, focusing on how writers can best communicate with readers and providing plenty for both to learn from and enjoy.

Ancient Echoes, Robert Holdstock: Once more delving into the psychological and mythical depths that provided him with the material for Mythago Wood, Holdstock provides a tale that feels more specific and grounded, yet less satisfying at the same time. To a large degree, the meat of the story takes place within the psyche of the protagonist, with the narrative point of view zooming in and out relative to how deep the story is delving, and as he comes face to face with remnants of prehistoric time, buried cities and their need for vengeance, and the threat of marriage and parenthood dissolving. It’s a heady brew to manage, and it never quite comes together, with a heavy expository passage towards the end and a reliance on a rather literal deus ex machina to bring it all to some sort of closure.

I, Claudius, Robert Graves: Fact and fiction form a perfect mix in Graves’ famous pseudo-memoir of the fourth Emperor of Rome. Ever the outsider, Claudius observes the long, tortured decline of his family, from the travails of Augustus to the depravity of Tiberius and insanity of Caligula, not sparing his own foibles and failings as he presents a picture of lethal ambition that is surprisingly fresh and modern. For all the evident depth of research underlying this work, it’s an easy read, with an unassuming narrator who capably manages his sprawling cast.

The Twelve Caesars, Suetonius (translated by Robert Graves): The lives of the rulers of Rome, from Julius Caesar to Domitian, are laid out in cleared-eyed detail in this fine edition of the classic set of biographies. Suetonius pulls no punches when it comes to describing the worst qualities of the Caesars, but nor does he neglect to mention the finer moments of even the worst of them, and the result is an even handed description of the rulers that Rome suffered and gloried in during the first century AD. In the wealth of incidental detail he provides, there’s plenty to be learned about Roman society and morals, and in his determination to stick with the facts he can find, Suetonius is surprisingly modern (apart from a recurring focus on the importance of omens and auguries in the life and death struggles over the rulership of Rome).

The Brain that Changes Itself, Norman Doidge: In a series of eye-opening case studies, Doidge reveals the brain’s ability to change itself to recover from trauma and to continue to change all the way through adulthood and old age. Overturning the notion of the brain as a machine that gets more and more fixed in its ways from childhood onwards, he shows in inspiring fashion that every one of us is capable of gaining new knowledge and behaviours all through our lives. Although it seems on some places too good to be true, if even a portion of its potential is real, this is a book worth owning, not just reading.

Schadenfreude, or The Little Book of Black Delights, Tim Lihoreau: I will happily admit to suffering from “calicurrophilia”, and while I am resistant to the appeal of “tollophilia”, “mecutempophilia” is another matter (though that might be saying entirely too much). Adopting the tone of an upper-class English savant, Lihoreau takes readers on a ride through the spurious offshoots of schadenfreude, in the form of delights in varying shades of grey and black, with titles that twist the scholarly use of Latin far beyond what it was intended to achieve. It’s not a laugh-out-loud book, but there are few who will read it without finding themselves smiling involuntarily when they are reminded of a pleasure that they perhaps should be more than a little ashamed of.