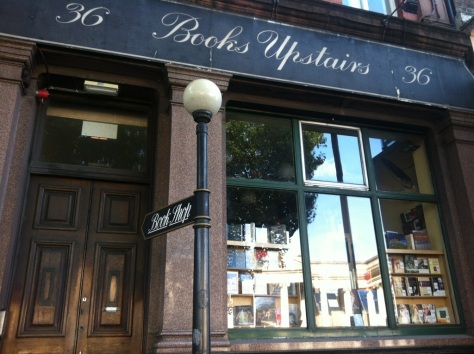 One of Dublin’s better bookshops. Very handy for Trinity students.

A quiet enough month for reading, dominated as it was by preparations for my return to college. Mostly light reading in what I did manage to get into, insofar as weighty fantasy tomes can be described as “light”. I’m not hopeful of getting much more in during the months to come either, so thin slivers of reviews may become the norm for a while.

Accelerando, Charles Stross: In charting the future history of the human race across the 21st century, as seen through the eyes of a very dysfunctional family, Stross flings out so many ideas and theories that the casual reader is likely to drown without some kind of grounding in modern science and science fiction. Moments of genuine human emotion are present, but they surface all too rarely amid the crashing waves of future shock, and as the novel goes on, it gets harder and harder to maintain the pretense of a link between reality and the events being portrayed. It’s an intriguing book, even a fascinating one if the changes occuring now and in the future to humanity are of interest to you, and Stross is a very clever writer, but its focus on humanity as an abstract whole rather than a personal characteristic is its gaping flaw.

Moranthology, Caitlin Moran: A collection of newspaper columns from the career of the author of How to be a Woman, this is by turns hilarious and affecting as it hops across every topic from womens’ rights to personal history to the hotness of Benedict Cumberbatch. Comberbatch is in fact a recurring theme, and Moran is no less effective when she’s gushing over him as she is when she’s interviewing Keith Richards or Paul McCartney. Blessed with a fine turn of phrase and a winning way with wild metaphors (David Cameron as a camp robot made of ham being one such), she’s like a less grumpy Charlie Brooker, and if her enthusiasm for certain subjects does sometimes get the better of her, it’s far from the worst problem for an author to have.

Gardens of the Moon, Steven Erikson: The self-consciously epic “Malazan Book of the Fallen” series starts off with powers both profane and sacred converging on a doomed city and fighting over not just its fate but that of an entire world. This is fantasy as archaeology, with layers of lost races and civilisations and the reader left to consult the voluminous appendices as the author delights in throwing in yet more twists and new players every time they might be getting on top of all the schemes and counter-schemes. This is not a book for the impatient, nor for fantasy virgins, but for those who enjoy grimy, doomed characters struggling to survive in a world of gods and monsters warring over fate itself, it has a lot to recommend it.