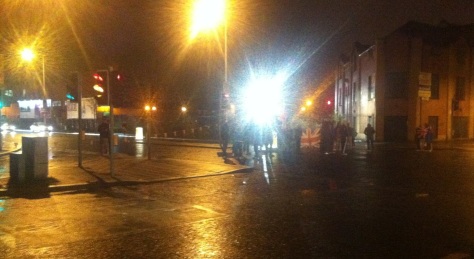 Hidden in the dazzle, the early evening protestors and their bunting.

In the end, it was a simple matter of stepping over a thin line of bunting stretched across the road. And then, later, walking through a line of mostly youngish men, hooded and masked. No one commented, or even looked my way. Even so, I felt my stomach knotting.

Why? There was no violence there, early on a wet night in Belfast, or later. (Though things did get hairy elsewhere and the next day.) The flag protests that have rolled across Northern Ireland for the past few weeks have been amply covered in the media, but this was my first direct contact with them. In place of brick and bottle throwing defiance, there was a slightly sullen matter-of-factness about the whole affair. Civil disobedience already turned into habit.

I’m not going to go into the justifications for the protests, which have already been covered elsewhere, except to note that few commentators on either side of the divide have dared to come out in support of violence as a response to putting a flag in a drawer as opposed to on a pole for most of the year. Unfortunately, both sides of the community in Northern Ireland are in the habit of launching the sort of street protest that inevitably leads to stone-throwing and worse. For the young and the hopeless, it’s better than dealing with the everyday grind.

So if I wasn’t facing violence, what was it that caused my stomach to curl in on itself? Some of it, perhaps, was a reminder of what I’d left behind. I’ve been in Dublin for a long time, and even when I lived in Northern Ireland it was in a relatively peaceful corner, where the Troubles mostly came in the form of daily news reports. In the North, old grievances run deep, and fears run along with them. Fear of the Other and what they might do if unchecked.

So the protests were a response to the apparent nationalist victory at getting the Union Jack taken off Belfast City Hall most days of the year. An effort by the loyalist community to throw their weight around, to prove to the police, nationalists and anyone watching that they could do so if they wanted. Swaggering is one word. Intimidation is another.

And it was that intimidation that my stomach was responding to. I’m not a violent person, and my first response to conflict is usually to avoid it. But when gangs decide to block passage along the Ormeau Road, as others did elsewhere that night, avoidance is no longer an option. Meekness works instead, avoiding eye contact and just passing by, hoping that the self-appointed big dogs have bigger fish to fry.

And where was I going that night? To Ravenhill, where an Ulster rugby team that has garnered the support of both sides of the community slogged their way to another victory in the rain. Among the flags there were plenty of Northern Ireland and Ulster banners, the best of which featured the Red Hand grasping a pint of Guinness. But no Union Jacks and no tricolours. We should all be so lucky.

2 thoughts on “A Barricade of Bunting”