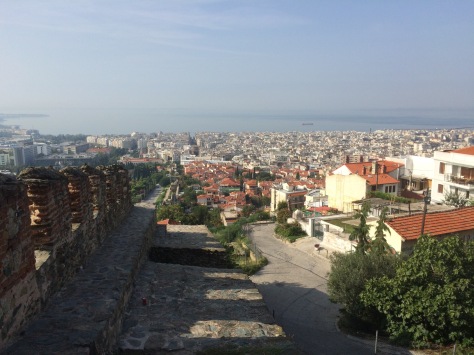 It was all downhill from here…
If, like me, you harbour illusions about your ability to navigate around a foreign city unaided, Thessaloniki will disabuse you of them. Not so much the newer city, with its straight lines parallel to the dockside, but the older city, in the vicinity of the ancient acropolis and slightly less ancient Byzantine walls.
Here, roads go up and down, intersecting in random fashion, usually one lane wide but sometimes no lanes wide, owing to either parked cars or suddenly turning into stairs instead of a street. And while you’re trying to figure this mess out, the cats of the old city are watching you, aristocratically amused by another human struggling to survive in their domain.
I managed well enough last night, locating my hostel, the exceptionally welcoming Little Big House, and a pleasant place to have a beer in the form of Toixo Toixo. That was limited stuff though, and not long after beginning a day of perambulating this morning, I was reduced to heading vaguely downhill and hoping that I’d run into either the city walls or the sea.
Not that wandering wasn’t fun though, and once I did get my bearings again, there were plenty of places for this historical traveller to see, many of them relating to the little-thought-of Roman Emperor Galerius, who made Thessaloniki the capital of his eastern empire, a status it only held for a little time before Constantine moved the entire business to Byzantium/Constantinople.
Between that and the museums and the White Tower, wherein medieval prisoners were wont to be, well, imprisoned, there has been more than enough walking done today. The time has come to eat, at the Kitchen Bar by the waterside, before figuring out a route back to the Little Big House. If you don’t hear from me in the next ten days, send a search party…
Note: The wifi in the Kitchen Bar was pretty dire, so I’m posting this from the Little Big House. Which wasn’t impossible to find. Not easy, but not impossible either. 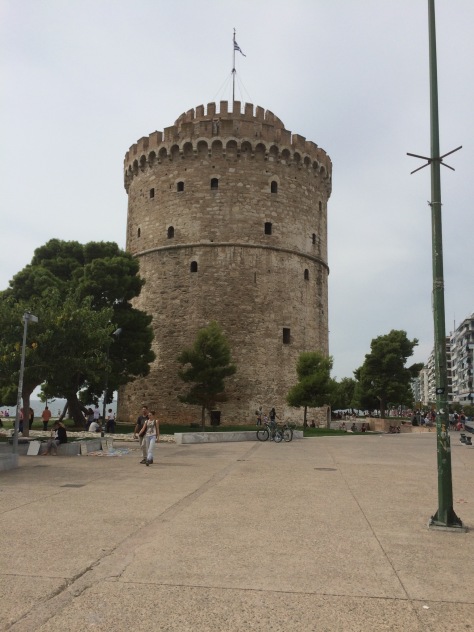 The White Tower. Once known as the Bloody Tower, before they literally whitewashed it.