The progress of my Christmas and New Year celebrations has remained much the same ever since I moved down to Dublin. Spend Christmas itself with family, then return to Dublin to see in the New Year with friends. Depending on who’s available, this can either be a party or quiet drinks in someone’s house, or braving the madness of the city on New Year’s Eve. This year though, I did something a bit different.

One of my friends has, for the last few years, spent the holiday period away from the grey dampness of Ireland, instead seeking out the sun of the Canary Islands, off the coast of Africa but legally part of Spain. At her suggestion, I decided to join her this time out, booking an eight-day trip to the island of Fuerteventura, not only to enjoy the sun and the unseasonable warmth but to enroll in a surfing school for six of those days. Now, while I run a fair amount and can swim if push comes to shove, my sense of balance could be generously described as non-existent, and the chance of me making a decent showing of surfing seemed very unlikely. Still, I’ve been making an effort to try new things for the last few years, and this was as much of a stretch as I’d pushed myself to, so it seemed very appealing.

Anyway, this is not going to be a day-by-day report on the whole experience. Given that the days were relatively samey, involving surfing in the morning or afternoon and drinks and dinner in the evening, such a report wouldn’t be the most entertaining. Instead, a few snapshots on what the whole experience was like.

A word on the weather first. At around the time that Ireland was bouncing along a few degrees above freezing, Fuerteventura enjoyed more or less consistent temperatures of around 20ªC. Add to that the lack of humidity and habitual blue skies and it felt a lot warmer. Not so warm as to be uncomfortable, but whenever I ventured to put on a pair of shorts I never felt out of place. The sea was pretty warm too, on the occasions that I ventured into it. Which is to say that despite the fact that it was the Atlantic Ocean I was swimming in, it was pretty easy to get used to the chill. When surfing, this was made even easier by wearing a wetsuit. Which brings me to the next section.

I’d booked six days of surfing lessons – no one planned on doing anything, let alone surfing, on New Year’s Day (more on that below) – and I made it to five of them. One morning surfing lesson was missed due to an overly late night the evening before. At the start of the week, I was struggling to stay on the board even when laying flat on it (and giving my neglected core muscles an unwelcome workout). By the end of the week, I could catch waves more often than not and raise myself up to one knee, though I never did manage to stand up, which had been my goal before the week began. A minor disappointment, but not a complaint. The teachers of the Quiksilver/Sunwave Surf School did their best with me, and they and the other students were a lot of fun to hang out with. No one was too serious or competitive about it, and even at their most crowded, the beaches were a good place to surf until your arms and lungs couldn’t take any more. Whether I’ll ever try it again I have no idea, but I enjoyed the attempt.

Fuerteventura is a long, mostly flat island that’s essentially one long scrap of volcanic rock running north-south not too far west of the African coast. It’s one of the oldest islands in the Canary archipelago, formed (like the Hawaiian Islands) by a hot spot deep within the earth’s mantle that still keeps the more westerly and younger islands actively volcanic. Fuerteventura though is long extinct and eroded, its calderas now manageable peaks and its beaches shallow sweeps along the coast. It’s popularity as a tourist destination is obvious, though it’s overshadowed somewhat by the neighbouring islands, such as Lanzarote and Gran Canaria. A lot of the landscape is a barren moonscape of volcanic rock, where goats and chipmunks can get along quite well but more picky creatures like humans have to work at it. There’s a bit of variation here and there, such as the dunes of the northeast and far south and the rocky hills of the Midwest, but as a whole the scenery doesn’t vary a lot. 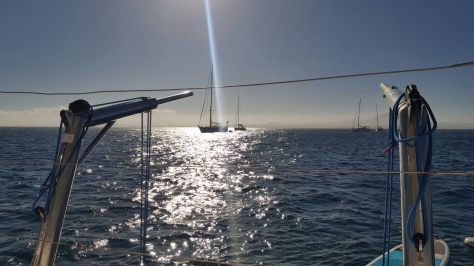 I was staying in Corralejo, a surfer resort at the northern tip of the island, close to some of the better beaches. When not surfing, this was the main place to stroll and hang out, and there were good and cheap places to eat and drink. Having a friend who knew the area well was a major advantage on this side, as there were also plenty of tourist traps to fall into. We both managed to discover a new bar on the last evening though – the hard-to-find but very fun Babel, with all sorts of literary and occult paraphernalia lining the bars and walls. As for other activities, a highlight of the trip was a catamaran cruise that took us out to a small island just off the north coast and offered snorkelling, kayaking, and as many drinks as you wanted from the onboard fridge. Not that I didn’t try to be at least a little healthy. I went for a few morning runs whenever my surf-battered body felt up to it, including a somewhat questionable New Year’s Day morning run that took me up and over a few of those calderas, then back to Corralejo via an under-construction road. It probably did me good in the long run, but I’m not sure that doing it in the first place was wise.

Beyond surfing and enjoying the pleasures of Corralejo, I did try to get out and see the rest of the island at least once. Sadly my friend wasn’t up to joining me on this part of the trip, but there was enough to experience to suggest that initial perceptions of Fuerteventura as being monotonous were perhaps a little unfair. El Cotillo on the west coast offered up rawer Atlantic conditions and some historic forts, while near the town of Betancuria I found a hilltop villa-cum-museum that offered amazing views while delving into the natural and geological history of the islands themselves. There were slight problems in getting up to the museum, which involved large tourist coaches and twisting, single-lane roads with large drops on one side, but I’m still here, so that all worked out well enough. I even ventured down to Morro Jable on the southern tip of the island, where Jandia Beach is surrounded by wetland inhabited mostly by chipmunks and offers the sight of a massive lighthouse and a sailing ship packed with revellers tacking very close to the coast indeed.

Getting There and Getting Around

On my way back from Morro Jable, I approached the island’s airport from the south and enjoyed an impressive view straight down both runways, watching flights coming and going. Flying from Dublin to Fuerteventura isn’t a major problem. Ryanair and Aer Lingus both offer flights, though not every day of the week. The airport itself is neither the best nor the worst I’ve experienced, being a cavernous modern space that has enough food and shops to keep you occupied until your flight is boarding. Getting through security may be much less fun if you’re unlucky, but I got away with it for the most part. As for getting around the island, I didn’t move around much, though the island’s bus service is cheap and regular, and the main roads are good enough for a decent driver to negotiate with ease.

On the whole, it was a nice end to one year and beginning to another, though activity holidays do have the disadvantage of tiring one out rather than enabling rest and relaxation. I may not surf the New Year in again (though I wouldn’t rule it out), but I’d encourage anyone else to at least consider it.