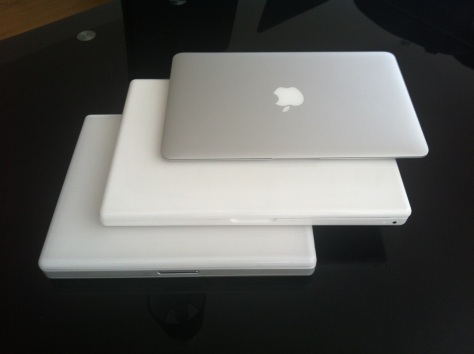 To date, I have owned four Mac laptops, more or less. The first, back in my college days, was a Powerbook 145, which came with a black-and-white screen, a floppy drive and 2MB of RAM. From the privileged vantage point of the present day, it would seem unbearably clunky, heavy and underpowered, but at the time it was a revelation. I’d been using Macs for a few years, but to own one that I could throw into a bag and carry over one shoulder? Genius. (Mind you, my un-ergonomic habits with this laptop probably contributed significantly to a tendency to stoop and lean to one side that persisted for years.)

The one major drawback of the 145 was one that plagued most laptops of the time and would continue to do so for years: reliability. It didn’t last me more than a few years before it broke down to the point where repairing cost as much as replacement. Since I didn’t have the coin to do either, I passed out of the realm of Mac laptop-dom for several years, reverting to a desktop iMac when I finally got a job and could afford a machine of my own.

When I finally got my hands on a Mac laptop again, about ten years ago, it was in the form of a 12-inch white iBook. (The bottom layer of the laptop sandwich above.) With a PowerPC G3 CPU, an unheard of 128MB of RAM and a combo CD/DVD drive, it was a major step up in every way. The 12-inch form factor made it all the more appealing, as it was far easier to carry than the by-then lost in the mists of time 145. It was a lot more robust too, and it suffered its fair share of battering as it accompanied me for several years. However, it had one fatal flaw: a logic board issue that broke the connection between the computer and its screen. As before, the cost of repair rose too high, and the iBook was banished to a cupboard as I returned to the world of the desktop.

Five years ago, I took another shot at the Mac laptop scene, this time in the form of a 13-inch polycarbonate MacBook. (The middle machine above.) Like the iBook, it was white and plastic, but it raised the solidity factor a few notches, and despite the fact that it had a larger, 13-inch screen, it felt sleeker and lighter to carry. Despite the plastic shell’s tendency to fray at the edges (and the fact that the first iteration of this laptop was stolen by an absconding flatmate when only a couple of months old), it was by a long distance the most robust laptop I’d ever used. In five years, the only problems it suffered were a few hard drive glitches that eventually ironed themselves out.

However, five years is a long time in computing, and the MacBook has been struggling with newer software for a while. So the time came last month to put it out to pasture and move on. Where to? To a MacBook Air, leaving behind the world of polycarbonate in favour of an aluminium unibody. This leap shouldn’t be understated. The screen is a mere 11 inches yet bright and pin-sharp, and the laptop itself is so thin and light that the first time it was in my shoulder bag, I had to resist the urge to check whether it was there.

For all that, it feels amazingly robust. For someone who is used to thinking of computers as circuit boards wrapped in a plastic shell, this feels like a solid lump of computing ability. Apple gets a lot of grief for making machines that users are never supposed to delve into or alter, but the tradeoff is clear: this has been engineered to within an inch of its life, and picking out a flaw is very hard to do. The leading edges are so thin that the thought of attaching the Air to an axe-haft and using it to split wood isn’t completely ridiculous. The sound that the lid makes when it closes is redolent of solidity in much the same way as the sound of a high-end car door closing.

No doubt I’m still in the afterglow of an encounter with the new shiny. It’s happened before. There may yet be flaws that time will reveal. At the moment, all that occurs to me is the fact that my hands are a little large and come into contact with those sharp case edges when I type a little too often. A case may be needed, but for once it’ll be for my protection more than it will be for the machine’s.