This one is a bit delayed. A bit more than a month delayed, in fact. Apologies for that—I don’t like leaving things unfinished, and just because my Greek odyssey ended in quiet fashion was no reason to leave my audience (you’re out there, right? Is this thing even on?) hanging.

Chania, in the west of Crete, was a quietly pleasant way to wrap up my travels. Founded as Kydonia long ago in the Minoan age, it passed through the hands of multiple powers, both foreign and domestic, over the intervening centuries, all of which left their mark. No massive museums to rival those in Athens or Thessaloniki, or fortresses like those of Nafplio or Mycenae. Yet with a cafe tucked into a narrow alleyway, twisting streets filled with craft shops, the relics of Venetian fortifications, and an old church turned into a museum, with relics of the Ottoman occupation in the garden, there was more than enough to see.

It would perhaps have been nice to spend an hour or so on the beach (or preferably in the sea), but wild weather and the first hints of autumn in the air put paid to that. I got plenty of the sea in my face just by strolling along the promenade, and the main adventure of my time in Chania was had the first night, making my way all along the long, crumbling breakwater to the old lighthouse, joining a French couple in climbing over the locked gates to do a little light trespassing for the sake of a good photo.

So Chania was a place for resting and relaxing, either collecting my thoughts and resting tired limbs after more than a week of walking to and around new experiences, or steeling myself for the inevitability of a five-hour Ryanair flight and the cattle drive of the airport that preceded it. With that in mind, as well as the long gap between getting home and writing this, here are a few collected thoughts.

Emerging from the Secret Cistern in Mycenae. It’s bloody dark down there.
I mentioned before that only a scrap of mythic Mycenae remained in Nafplio. Specifically, that scrap exists in the foundations of the Akronafplio, the old Acropolis of the city. In fact, for a long time the acropolis was the city, until the Venetians came along and created the lower city. As with the Palamidi fortress, nearly everything that’s there now is Venetian, and though there are odd chambers and hidden passages still visible amid the foundations, it’s hard to explore them far among all the restoration work.
In contrast, half an hour away by bus, the citadel of Mycenae is almost pure myth. This is Homer’s Mycenae, the city of Agamemnon, founded by Perseus, the son of Zeus. Although it was never forgotten during the dark ages between its height and the rise of Athens and Sparta, what history it had faded into folktales. The stones of the walls and gateways were so massive that it was thought that Perseus had called on the cyclopes to help him build the city.
Through painstaking excavation and the decipherment of scraps of Linear B script from the site, we know a lot more than the Greeks did about how Mycenae operated: its rule by a “Wanaka” and the trade links that stretched all across the Mediterranean and even as far as the British Isles and the Baltic Sea. There are records among the Hittites, Egyptians and other ancient civilisations of contacts with the “Ahhiyawa”, and there we can even glimpse a few names, though their exact provenance is hard to determine. In general, we know no more of the personages themselves – the kings and queens, heroes and villains – than Homer did when he spoke of “gold-rich Mycenae” and its king.
This kind of thing fascinates me and always has: the point in time where history fails us and the only point of reference we have is half-remembered stories of great events and turning points. Be they ever so twisted for dramatic effect or to provide a moral point, they’re as much truth as we have. It still happens too: think of the tales of George Washington and the cherry tree or Abraham Lincoln and his log cabin. Closer to Ireland, was there ever a Cuchulain, or was he just a recasting of an older tale or a folk hero with no basis in fact?
Stories have their own gravity, and myths are just those stories that have been around long enough to solidify into a bedrock for other tales. The Iliad and Odyssey dragged in heroes from other stories, just as King Arthur and Cuchulain became the dominant stories of a nation and more: stealing the narratives from other tales and recasting them as their own. What then happens to those stolen stories?
In some cases, their fate is to be buried, as with the Akronafplio. Larissa Fortress near Argos, another famed ancient city, has Mycenean stones among its foundations too, but the rest of the edifice is of much newer make. Argos had the good fortune though of being celebrated through its heroes, both in Homeric fashion and into historic times. Other sites have not been so lucky.
One such can be seen closer to Nafplio. The citadel of Tiryns is, if anything, even larger than Mycenae. However, it’s in poorer repair and sits on a less imposing outcrop. More importantly, it features in few stories now. The people of Tiryns left behind a monument in stone, but the age that they lived in is the one we now call the Mycenean Age. A tribute as much to Homer and his skills as it is to the greatness of that city and its peoples, whom we remember now only through his tales. 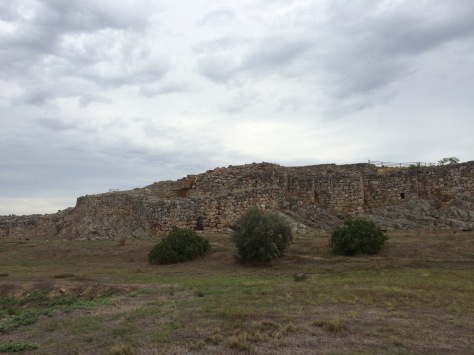