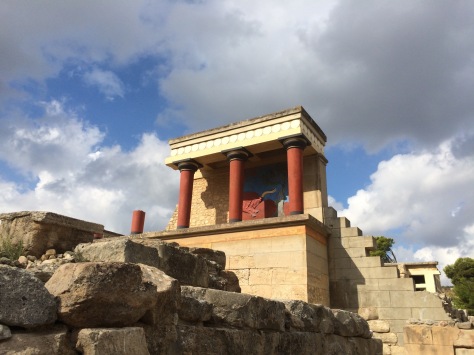 Knossos, both restored and unrestored.

Travelling to Crete is like taking the lever that controls the Greek history time machine and pushing it as far back as it will go without breaking. Modern political divisions notwithstanding, this is a very different country, and there’s no better place to see this than in Knossos, heart of the Minoan civilisation of Crete and fabled palace of the mostly legendary King Minos, his daughter Ariadne and her half-brother the Minotaur. (Look it up – it’s a little icky.)
Even for the Mycenean Greeks who supplanted them, the Minoans must have appeared to be something alien and ancient. In the court of the Pharaohs of Egypt, the men of “Keftiu” were regular visits and the acknowledged masters of the wide green sea. The first maritime kings of the Mediterranean, they bequeathed some but not all of their practices to the Myceneans when disaster and strife somehow brought down their power. (The role of the Thera eruption in that downfall is yet another fascinating possibility.)
Looking at the art of the Minoans, it’s still easy to note the gulf that separates them from the later, more realistic depictions of the Greeks. In religion, the Minoans were goddess worshippers, and while they did venerate male deities too, the shift that placed Zeus (born and raised in a cave on Mount Ida on Crete as the tale goes) at the head of the pantheon of Olympian deities came after their time.
This shift in culture, art and language is a fascinating one to try and follow. There are Greek scripts that seem to depict the ancient Minoan tongue. The Linear B text seems of Minoan origin but is used to depict Greek language. The Minoans rose and fell several times over the centuries, coexisting with the Myceneans for several of them until their uniqueness was eclipsed.
The Iraklio Archaeological Museum does an excellent job of putting this tale in its proper context. (Any flaws in my understanding of it all, I’ll have to put down to my sleep-deprived brain – and while I’m at it, I’ll blame any typos on that too.) It seems that the more the Cretans were plugged into the trading networks and political systems of other Mediterranean powers, the less distinctive they became. Eventually, the people who had built and decorated the palace at Knossos so gloriously (though not necessarily as it now appears, depending on your opinion of Arthur Evans) became just another territory. An appendage and territory of other powers, whether Greek, Roman, Byzantine, Ottoman, or Venetian.
It seems a shame, but we have the memories in myth and legend of those times and the relics recovered from the concealing earth and painstakingly restored. For me, I’ve enjoyed all that and more. My travels have taken me from Thessaloniki in the north of Greece, with its Byzantine and Ottoman influences, all the way to Crete, going ever deeper into history as I’ve continued south. This seems as good a place as any to stop. Maybe tomorrow, before I fly home, I’ll just lie on the beach for a while instead… 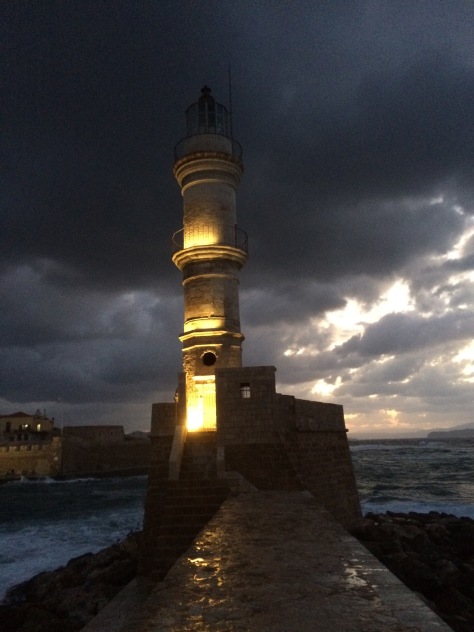 The lighthouse at Chania in western Crete. On a stormy night like this, there’s no place better to be.