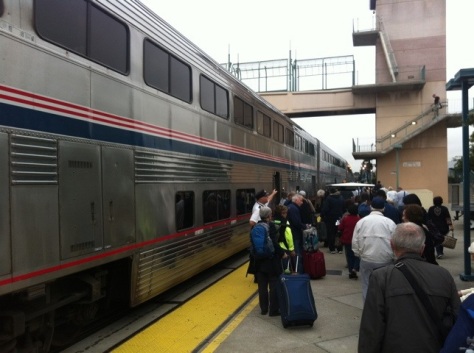 More comfortable on the inside.

My 20 or so hours in San Francisco marked the first time on this trip since London that I’ve crossed paths with a former journey. Seven and a half years ago I was there with a friend, visiting a friend of ours and his then relatively new girlfriend. They’re now married and living in London, and it was their house I crashed in on the first night of this odyssey. The very first digital photos I ever took were on that trip, and they’re still on my laptop, which is filling up with the photos from this one. Everything circles around eventually.

San Francisco hasn’t changed much, thankfully. I liked it then and I like it now: a city that seems determined to keep the pressures of the everyday world at arm’s length whenever possible. I had as much fun walking around the piers, up Telegraph Hill, through Chinatown and out to Haight-Ashbury as I have on any of my more exotic walking tours on this trip. Plus, the longer I’m in the U.S., the stronger the mental and emotional ties become that will bring me back home in a few weeks. It’s a nice way to be eased into the end of a journey like this.

If there’s any source of melancholy here, it lies in the seven-and-a-half year gap to my former visit: it was a different time and a different journey, and I was a very different person, still in my twenties and with a lot of things to learn. Yet given just how much has happened in all that time – how much has even happened in the past year – I can’t help but be optimistic when I consider just what I might be reminiscing about in another seven-and-a-half years time. I haven’t got the least clue what that might be, but if it’s this trip, then I’ll be smiling when I think of it.