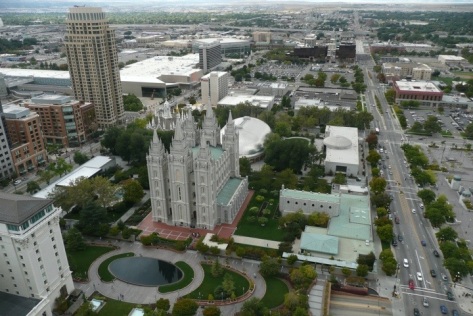 Not actually made out of Lego.

On the train to Salt Lake City, I had my first Mormon experience a little ahead of schedule, when an elderly gentleman sitting nearby started chatting and soon began to try and persuade myself and another passenger (he’d mistaken us for a couple) that the Church of Jesus Christ of the Latter Day Saints was the be all and end all of the Christian experience. Intent as I was on enjoying the train ride, I limited my responses to nods and making a few historical points, but when he claimed that the temple in Salt Lake City was the most beautiful building in the world, it at least gave me something to add to my sightseeing list.

Well, I’ve seen it (that’s it up above, as seen from the tower-block church headquarters next door). Seen it in the darkness, after my train got in at 3am and I decided to wander around; seen it in the sun, though without being let in, as it’s sacred even among the church members themselves; and seen it at sunset, which was pretty damn magnificent (the sunset, that is), viewed from the State Capitol on the hill above. And, well, it’s . . . nice. Solidly built out of granite, with hints of both Disney and Gothic styles in there. But that’s as far as it goes. Even when judged against other religious edifices, it’s no Hagia Sophia and no Pantheon. It doesn’t even hold a candle to St. Peter’s Basilica, which lacks the purity of form of the first two.

The fact that it was built over the course of 40 years by pioneers carting granite from a quarry a few miles away is impressive, though that point falters a bit when one realizes that most of the building happened after the railroad arrived, allowing rather faster stone deliveries. Ultimately, it’s a solid building with a plain facade, a golden statue on top and an unfortunate resemblance to a build-it-yourself Lego kit. To call it the most beautiful building in the world requires the speaker to invest it with qualities that exist outside its physical proportions.

This is not to knock the Mormons too much (I’m not going to type out the full church name every time, which they seem to prefer). Each and every one of them whom I met was polite, friendly and happy to chat to a visitor from abroad. Then again, I could count on the fingers of one hand the number of people who’ve been out-and-out rude to me over the course of the past two months or so. I just struggled at times to cope with the blurring of the lines between “belief” and “truth”, and eventually I escaped to the pub and then a cinema to see the excellent Ides of March, which is all about how politics and the real world destroy idealism.

Hmm. Maybe blind faith isn’t so bad after all. Where did I put that pamphlet?

(Hopefully some of the above is coherent – I’m in Denver now, and by my reckoning, I’ve had about six hours of sleep in the last 48. Time for the head to hit the pillow at last.)

3 thoughts on “Justified and Ancient”