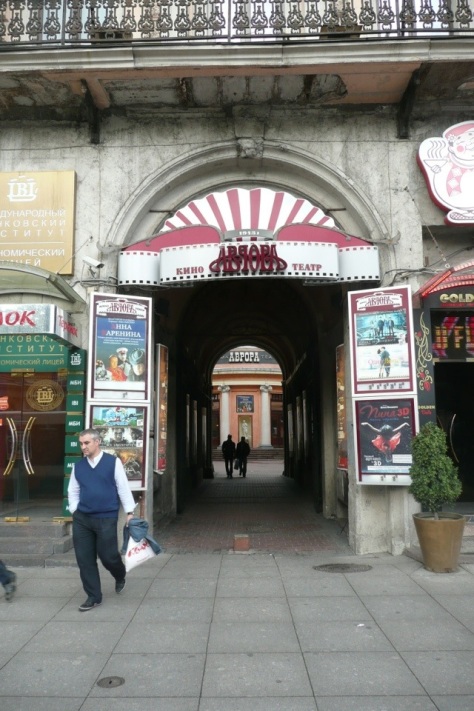 The St. Petersburg cinema where I watched Conan in Russian.

Down to the last two months of the year now. And for me, this is more or less the first day of the rest of my life. Everyone else off at work, myself beginning the search for work. I’d say it’s going to be interesting. Still lots to deal with, but a good start made – and I’ve signed up with NaNoWriMo again, just so I’ve got that little extra spur to avoid becoming a couch potato.

While I continue to pull together my notes on life in general and my recent travels in particular, here’s my film and book reviews for August. Some old and new in both categories, mostly enjoyed during my sojourn in the U.S., which offered the time and space to make the most of both.

Sucker Punch: Zack Snyder’s stylised original piece is ostensibly about female empowerment in the face of sleazy, predatory male figures, amid a melange of fantasy dreamworlds, but the main question it raises is how far it can be said to empower its female characters as it trades in cleavage, panty shots and genre stereotypes. It doesn’t so much wear its influences on its sleeve as weave them into the heart of its very slender original story, where nothing is expected or required to make sense, and the main character never manages to portray a genuine emotion other than cowed terror. Derivative in every facet of its being, it is pretty but entirely vacant, and if Zack Snyder is the harbinger of a new wave of filmmaking that draws on comics, videogames and music videos, then the main problem is the fact that the sources he’s drawing on are already several years out of date.

The Ides of March: A top-notch cast of U.S. actors combine in George Clooney’s political thriller, which takes the West Wing notion of an idealistic liberal president and staff and shoots it full of cynical holes. Ryan Gosling is suitably unreadable as the central figure, whose idealism cracks after one bad decision, but as he falls into the rabbit hole of compromise and double-dealing, almost everyone is revealed to be hiding what they’re willing to do to win power. Focusing on interpersonal politics and the manipulation of appearance, it’s telling that it presents the most genuine characters as the ones who suffer most.

Hanna: Weaving fairy tale motifs into a modern spy thriller, Joe Wright’s film captivates as it presents a dark look at the notion of a child killer and the forces arrayed against her. The otherworldly Saoirse Ronan more than holds her own as the centerpoint of the film, even when the actors she’s caught between are as good as Eric Bana and Cate Blanchett, in the evil stepmother role. There are occasional moments where the implausibility of it all jars, but several good performances, a driving pace and an excellent soundtrack from the Chemical Brothers make for a satisfying whole.

Run Lola Run: Tom Tykwer’s 1999 hit film still has the power to catch an audience by surprise as it moves at a consistently breakneck pace through the tale of a young woman dealing with her idiot boyfriend’s criminal ineptitude. That might seem a bit harsh, but the gormlessness of said boyfriend is really the only bar to enjoying this tale of undying love driving Franke Potente’s Lola to find a way to defy fate and save the day. The use of animation, the propulsive techno soundtrack and multiple twists combine to make this a brief but utterly absorbing experience, more akin to several rides on a roller coaster than a more traditional narrative experience.

Moneyball: The American pastime of baseball gets crossed with statistics in this film, which never quite escapes its nonfiction roots. Brad Pitt is as weathered an everyman as he’s ever been and he’s surrounded by an able (and, in Philip Seymour Hoffman’s case, well-disguised) cast, but the interesting shades of his character are pushed into the shadows by a baseball plot that lacks a sense of either desperation or adversity. The result is an intelligent, well-acted and well-shot drama that lacks a beating heart at its centre and is likely to send audiences away more intrigued than uplifted.

Halo: Cryptum, Greg Bear: Taking the trope of “advanced, ancient and vanished race,” Greg Bear personalises it by telling the story of just how they came to disappear from the viewpoint of one person caught up in titanic events. Rather than being constrained by the mythos of the “Halo” games, Bear throws in a few touches to satisfy fans while building on and deepening the sketchier deep history and making it his own. The result is a solid big-ideas science fiction read, which is unsatisfying only in the fact that, as the first book in a trilogy, it has to leave many of its mysteries unexplained for now.

Dune, Frank Herbert: A classic of the science fiction genre, Herbert’s opus is a dense tome that attempts to portray the future of humanity from as broad a viewpoint as possible. Delving deeply into the motivations of its many characters, it strings them together through fate and circumstance, and although the end point of the story is obvious from the start, the author is more concerned with how the characters get there and why. Its lack of success in translating to other media is probably connected to the reason why it has aged relatively well over the decades: although it is science fiction, science barely plays a role in the book, buried as it is under layers of politics, philosophy and religion.

Kill the Dead, Richard Kadrey: With the second book in his Sandman Slim series, Kadrey ups the stakes for his hellbound hero, unleashing a plague of the dead, the loss of friends and loved ones and several mysteries all tangled together. Sandman Slim remains as appealing a central character as he was in the first book, reluctantly dealing with all that heaven and hell can throw at him, though the loss of the directly personal motivations of the first book does detract a little from the feeling of desperation. Rife with appealing twists on horror tropes, this is much more in the pulp/noir tradition and while it may not hit the high notes as consistently as its predecessor, it is still a swift and absorbing read.

American Sphinx – The Character of Thomas Jefferson, Joseph J. Ellis: Setting out to define the character of America’s secular saint, Ellis neatly dissects Jefferson’s political thinking, exposing him as a high-minded but often naive visionary. There are a few gaps in this recounting of Jefferson’s career, but a more serious flaw is that in picking apart the Jefferson of myth it leaves few clues as to how the historical Jefferson came to be seen as a leader among a group of the most impressive intellectual figures of his day. It’s a readable and well-structured book and at its strongest when reminding the reader of the dangers of reading Jefferson’s thought in modern-day terms, but as a guide to Jefferson himself, it seems inadequate on its own.