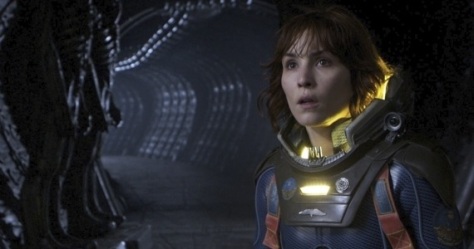 Ridley Scott’s reputation as a director was built on two science fiction classics: Alien and Blade Runner. The most recent phase of his career began with a Hollywood blockbuster: Gladiator. With Prometheus, he makes a long-awaited return to science fiction, and all three of the above-mentioned films inform what he’s created with his latest offering.

Spoilers Below – I went into the film knowing as little as I could about it. That may have informed my reaction somewhat.

First things first: Prometheus may be set in the universe of Alien (though not, importantly, on the same planet), but it’s not a claustrophobic horror film like its precursor. Nor is it a gung-ho military thriller like James Cameron’s Aliens. In fact, if there’s a Ridley Scott film that it’s closest to, it’s Blade Runner, with its focus on the themes of created life and the desire of that life to confront its creator.

Gladiator plays its own role in Prometheus‘s ancestry because it reveals Scott’s love of marrying grand themes with spectacular vistas. It also highlights the need for a strong central performance (and, preferably, a sweeping score) to paper over any cracks in the story drafted in to present these themes. Gladiator had one, Kingdom of Heaven didn’t, and Prometheus, well…

The heart of Prometheus, and of the problems with the film, is Noomi Rapace’s Elizabeth Shaw. An archaeologist driven by personal (though only vaguely defined) religious belief to seek out the alien creators of the human race, she proves warmly human and resilient in the face of tragedy and horror (including the film’s one truly gruesome scene), much in the same manner as Sigourney Weaver in the original Alien, whose shoes she’s clearly stepping into.

The problem that Rapace faces in the central role is that in her wide-eyed credulity and victim role she’s difficult to sympathise with or cheer for. The harder edges of the Weaver character have instead been transferred to Charlize Theron, who’s handed the thankless and underwritten role of the corporate bitch. Caught between the intertwining plots of pseudo-scientific curiosity and corporate underhandedness, Theron manages to suggest an interesting character but receives short shrift from the script and suffers a cheeseball fate more suited to a budget ’60s exploitation flick.

In a cast stuffed with underwritten characters, then, Michael Fassbender’s almost-human android David steals the show. An actor who already looks as though he has a time-share in the uncanny valley, Fassbender nails the mannerisms of a human substitute who examines his creators and isn’t impressed by what he sees. Even so, the reasons underlying his actions throughout the film remain opaque, and the reveal of the real reason for the mission, two thirds of the way through, fails to have the impact it needs to and sets the stage for a muddled conclusion.

Most of my problems with Prometheus come back to the writing. From what writer Damon Lindelof has said, the development process involved him listening to what Scott wanted to do and explore and then putting it into the script. However, the film is so dominated by its big ideas that surfeit of characters are never given room to breathe and tend to spout brief rationales for their actions rather than naturalistic dialogue. There are occasional nice character moments, but few of those have any impact on the film as a whole. Evidence of the overstuffed plot can also be seen in the repeated presence of one of my pet peeves: the tendency of characters to suffer from attacks of plot-driven stupidity.

Prometheus is admirable in a lot of ways: it tackles some big themes, looks beautiful and has an excellent cast. It’s certainly worth watching, and it may even reward repeat viewing and the inevitable director’s cut further down the line. However, it’s ultimately a disappointment, due to a superficial and disjointed approach to both the themes it tackles and the characters it uses to explore them.