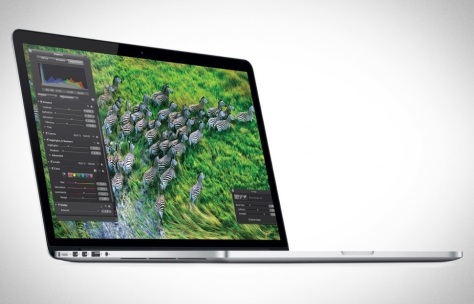 So Apple revealed the long-awaited upgrades to their laptop line at their WWDC last week. As someone who’s been using their products for years, and for whom a new laptop is rapidly becoming more of a necessity than an option, I was keen to see what they might provide. And amidst all the glitz and sheen, I got plenty of information on what my next laptop might be, but also the one after that.

I’ve had my eye on the MacBook Air ever since its first revision made it a compelling option rather than an overpriced status symbol. The 11-inch version is eminently portable, and all it seems to lack over its 13-inch brother are an SD-card slot, a slightly faster processor, and better battery life. All things that are desirable but not must-haves. The new MacBook Airs are faster than before, now come with USB 3.0 ports and improved video cameras and are just as sleek as ever.

However, the MacBook Pros also got their due upgrades, also with faster processors. Shiny and sleek though they may be, they lack something in the portability department when compared with the MacBook Airs, but make up for it in terms of connectivity and storage. Hard drives are still streets ahead of solid-state storage in terms of capacity. The 15-inch Pro is out of my price range, but the 13-inch would be a very fitting replacement for my 5-year-old MacBook.

And just to delve into the future, Apple’s 15-inch MacBook Pro with Retina Display is a sleek replacement for the 17-inch MacBook Pro as an Apple status symbol, ditching the DVD drive in favour of wireless connectivity and a gorgeous screen. It is, undoubtedly, the future of Apple’s laptop line, in the same way as the MacBook Airs were when they arrived. A few years down the line, this is the path that Apple and the rest of the industry are going to follow. However, if its non-Retina 15-inch brother is out of my price range, this slice of things to come isn’t every within view.

So which to go for? The 13-inch MacBook Pro seems the more professional option, with everything I might need to actually work on it and more screen real estate than my other preferred option, the 11-inch Air. Except that their screens are pretty much equal in terms of resolution, and the Air is far more convenient to carry around. Add a DVI connector to the purchase so I can use an external monitor and even that advantage slides away, leaving only speed and storage. Speed isn’t something I need to worry about much – I don’t play games on my laptop, and both machines use the same Intel graphics anyway. As for storage, I’ve been coping with a 130GB hard drive on my old laptop for years. A 256GB solid state drive would be a massive leap in terms of both capacity and speed.

So I guess I’m opting for the 11-inch Air, tempted though I was by other options. Dock it at home for professional work and take it on the move for whatever else I might use it for (including work). All the while, I’ll be casting eyes at the Retina display and dreaming of future machines…

4 thoughts on “My kingdom for a laptop, but which one?”