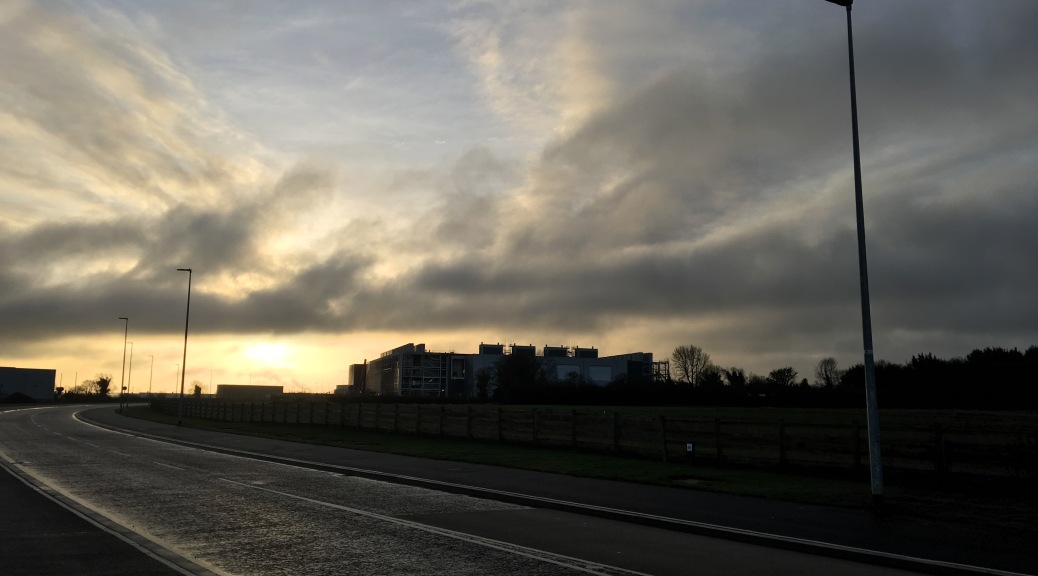 I’ve completely let updating this blog slip, haven’t I? I’m not going to pretend it’s not my fault either. I had a big piece planned on revolutions—how they happen and why we might be staring down the barrel of a few of them—but the subject slipped away as I got distracted, and it’s still lurking in my drafts folder, far from finished. It’ll have to lurk there for a while yet, as I’ve not the time to devote to making it worth showing to the masses.*

In the meantime, here’s something more ephemeral but personal for your delectation. After an extended period of joblessness and temporary work, I am once more gainfully employed. (I ensured this would come to pass by such actions as renewing my library card, which I’ll now never use, and taking up time-consuming hobbies like, oh, keeping this blog filled with content.) This job is a bit of a departure for me in one specific way though: after many years of working within walking distance of home and the city centre, I am now out in the wilds. Not quite outside the city of Dublin, but not quite inside it either.

This has wreaked merry hell on my previously relaxed commuting habits. (As opposed to my even more relaxed non-commuting habits of the past few months.) A four-hour walk to work is clearly untenable, a one-hour-plus cycle might work if it didn’t route me through the horror that is Dublin city centre traffic, and a two hour bus trip was only acceptable for the first few weeks. Which means that after years and years of avoiding it, I now have a car.

But it’s not the new experience of driving to and from work, or the multitudinous indignities of trying to get a used car insured, that I’m writing about. No, this post is about the things I’m seeing on that commute, out where the city meets the countryside.

Dublin’s geography is pretty traditional, by and large. The city centre, which clusters around the River Liffey, is surrounded by neighbourhoods that were once towns and villages in their own right, before ravenous Dublin swallowed them up. The further out you go, the larger the spaces between those neighbourhood centres, and into those space have grown suburban sprawls and small industrial estates, served by buses and the occasional tram (if you’re lucky). Beyond those lies the ring of the M50, alternately artery and car park, depending on traffic conditions.

This is very much the edge of the city, the place where its tendrils have stretched out but not yet taken over. The new and the old rub shoulders, and green spaces have been marked off for future use but not yet inhabited. I’ve spotted hawks and pheasants around the fields near work, fitting into ever smaller spaces as their living space becomes someone else’s. Country houses with ample space can now see massive warehouses and data centres from their back doors, and ruined and abandoned buildings stand ready for reuse or demolition, as fate or fashion require.

Cities grow not just not just in extent but in time. The collision between a city and the spaces it expands into is a collision between two different eras. All around my new workplace, roads are being ripped up and resurfaced, provided with ample pavements and cycle lanes, as current trends require. Of course, the trend now may not have been the trend during an earlier era, and so those cycleways tend to disappear as the reach the inner, older city. In time, those more interior, older areas may catch up with the fresher outer, but here and now, this is where things are newest.

The idea of cities as living things, growing organisms, whether benevolent or parasitic, is not a new one. There’s a lot of evidence for it, if you look. Imagine hanging a camera high in the sky above Dublin and taking a time-lapse video spanning months and years. Humans would disappear from the city organism, which would itself be seen to expand in pulses. Like a tree, the heart of the city would change little, and instead all the activity would be seen on the edges, as economic factors drive the need to swallow up more space.

Is this a good thing? Cities are necessary to the way the world works now. Population has grown and civilisation has grown complex to the point where a return to rural life is only an option for a few. Even so, the way that cities swallow up the green spaces and quiet villages around them is naturally unsettling. Speed and a lack of planning leaves a sense that the process is out of balance. Dublin’s a particular case in point. A combination of planning restrictions and the presence of major multinational companies have made life in the city unbearably expensive for many, and that expense and those multinationals have pushed that sprawl out further and further.

I’ve been lucky up to now in not having to confront the results of this. The first few weeks saw me spending four hours a day commuting by bus, into town and out to my new employer, then back in the evening. Getting a car was close to a necessity, as it is for many others, but in doing that I’ve just added to the congestion that strangles routes into, out of, and around the city at different times of the day. In the meantime, the city continues to grow, and I’ll be far from the last to hop on this treadmill.

The living fringe of city isn’t a place I’ve ever worked or lived before, so it’s interesting to see how it works. Whether you count it as growing into or devouring the space around it, it’s a process that’s going to continue. We need to get better at managing it, and at using the space the city already occupies. Both so we can move around them and so we can live in them. The city beast is one we have to live with—it’s up to us whether or not it runs wild.

*By which I mean however many of you actually read these occasional sound bites from my brain.