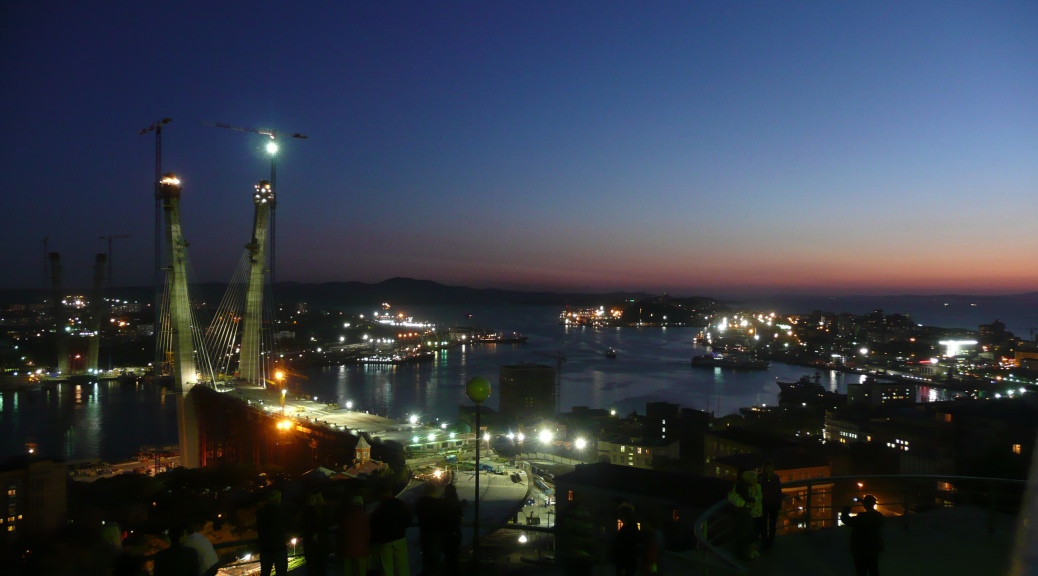 In European myth and storytelling, the western ocean is romanticised. Whether it’s Atlantis or Tir na nOg, or Tolkien’s Valinor, there’s a feeling of something of worth to be attained in the uttermost west. A few years before the Grand Tour, I’d visited California for a wedding and watched the sun set over the Pacific from the San Diego waterfront. For me, that moment was my furthest west. It could hardly be a surprise that my exploration reoriented itself afterwards.

When the time came to plan the Grand Tour, I had a choice. Take the Trans-Mongolian into China, like most travellers do, or take the traditional route past China to Russia’s eastern entrepôt, Vladivostok. Deciding that China was best kept for a more focused trip (because there would always be time, wouldn’t there?) and that I could hardly resist the opportunity to travel to Vladivostok when it presented itself, I went for the latter option.

First though, there was the small matter of actually getting to Vladivostok. My journey across Russia from Moscow to Irkutsk had been just the first half of my Trans-Siberian experience, and now I had four days from Ulan-Ude to Vladivostok to look forward to. For company on the train, I was sharing my cabin with two Russian women and one of their sons. Luckily for the sake of my fast-atrophying social glands, they had a smattering of English and a willingness to teach the strange Irishman some Russian card games.

So that was how the next four days went. Getting taught card games, questioned about what I was doing in Russia, and interrogated about why I, a man in my mid-30s, wasn’t yet married with kids. Staring out of the window at landscapes to which dissidents had been exiled in all-too-recent times, and roaming the carriages of the train and feeling like that ghost of the iron rails again. (Approach the restaurant with as much caution as the bathroom facilities on these trains.)

Even more so than the first half of the Trans-Siberian journey, this part felt like a venture into unknown spaces. Russian East Asia backs onto the furthest edges of the Russian realm, reaching all the way to the Bering and Arctic Seas. The first signs of oncoming winter were visible in patches, but I was surfing the line of its arrival and passed north of China and on towards Vladivostok before any great change came over the land.

So to the eastern city then. The Trans-Siberian reached its terminus in the early morning of September 19th (I think. The dodgy clocks on my phone and camera and the effects of time zone shifting make timing awkward.) and I said my farewells to my fellow travellers in the darkness of the train platform. I was wildly early to check in at my hotel, so once again I hefted my bags and found a coffee shop to lurk in until dawn.

The exploring itch was hard to ignore, but first I needed to shuck my burden. When I could, I headed for the hotel and once again ran into a wall of Russian bureaucracy and had to explain that, yes, everything had been booked long ago. Eventually alternating between sitting around waiting and standing at the desk pointing at my printouts proved an effective strategy and I was accepted as a guest. While I couldn’t set up in my room, I could at least leave my bags behind and go a-roaming.

I had three days, more or less, in the city. I won’t take you through every step of the way, but it was a dreamlike experience to be so far from home and surrounded by so much that was familiar and so much that was a reminder of that distance. Like San Francisco, Vladivostok is a port city, built on hills by the sea, and like San Diego it’s also a naval base, with a massive Russian navy presence.

The massive bulk of the half-completed Zolotoy Bridge became my constant companion, looming over the city as it stretched across the Golden Horn Bay. (Another familiar name from a previous trip.) I climbed the hills to watch the sun go down and rise, I ate dinner in a rooftop restaurant for Russia’s rich, and I roamed around the crumbling wharves where fishermen waited patiently at their rods.

Like Ulanbaatar, Vladivostok’s pavements veered between pristine and piecemeal, depending on where in the city you ventured, and I had to watch my step. Still, I spent happy hours crossing the city while listening to the Kermode and Mayo podcast, peering into tiny tanks in a hidden garden and taking a tour through a beached submarine where I somehow managed to avoid banging my head off the low-hanging ironmongery.

As much as I tried to connect into the city’s social life though, I didn’t manage it in Vladivostok. It’s not something I was good at, either then or now, but the city itself has a weird melting pot quality. The European side of Russia exists in full force here, as an outpost of the empire that was, but it’s layered with Chinese, Korean, Japanese, and even American flavours. Vladivostok is a city well worth the visiting, but it’s not likely to offer you any easy answers.

On my last day in the city, I roamed in the morning and did a bit of shopping, picking up a proper Russian fur hat from a military surplus store (which would mostly serve as a store for my growing collection of fridge magnets over the rest of the trip). I’d located the ship that was to take me onwards the day before, and it was no great problem to get on board and find my berth.

The actual experience of being on the ship was the first time I’d been around other traveller since leaving the Australians in Vladivostok. Our sleeping quarters were bunks in shared dorms (segregated by male and female) so most of the time we just wandered the decks. Most travellers were Korean and Chinese, but there was a core of people like me, who were in Vladivostok as part of longer journeys and now set to move on.

We formed a temporary social circle, one I was very glad of, and we chilled out, chatted, and partied as the evening drew on and the sun and land both disappeared in the west. It was a release for me, awkwardness mostly forgotten as I tried to restart those social skills enough to get through the experience.

The next day, we were due to pull in at Donghae on Korea’s eastern coast. The Eastern Princess plied a triangular route between Russia, Korea, and Japan, and this was the intermediate stop between when I got on and when I got off. Eager to add an extra country to my journey, I joined a few of the other travellers in braving Korean customs and catching a bus to the city centre. One quick trawl of the markets later, we returned to the ship laden down with fresh food, just in time to cast off.

We’d lost a few of the travellers to Korean adventures, including a couple of Austrian motor bikers, so it was a smaller group who partied that night. I even tried out the boat’s Japanese-style pool, but the dregs of a typhoon raised some heavy waves, resulting in an excess of sloshing. The bathers were ejected from the pool and returned to a ship that was still rocking and rolling.

I’ll leave it there for now. That was the evening of the 22nd, and it’s the evening of the 22nd now too. Russia had been left behind and Korean become another stop along the way. The Grand Tour felt like it had a momentum of its own now, and I was happy to just enjoy it, but Japan was waiting under the rising sun, and I had yet to understand just how much I was going to enjoy the next week.