Just an hour and a half down the Danube from Vienna, Bratislava feels like it’s half a world away. The western imperial solidity of the latter city gives way to a mishmash of old and new, Soviet straight lines rubbing shoulders with of Austro-Hungarian fripperies and the first intrusions of modern glass and steel housing department stores with all-too familiar names.

All of this is crammed into one of the smaller cities that I’ve visited to date, and it makes it hard to get a grip on Bratislava or, by extension, Slovakia itself. A relatively young country, having split off from Czechoslovakia, it still seems to be figuring itself out, an adolescent nation more sure of what it’s not than what it is.


That’s probably reading too much into my visit to the capital, which is in the western corner of the nation, but there are hints here and there.

Bratislava Castle, standing on a rocky peak that dominates the Danube, burned down in the 19th century and was restored in the Soviet era. It’s a restoration that left the interior feeling rather empty, albeit with fascinating nooks and crannies like the 85m-deep castle well and the Crown Tower. The exhibitions it houses help to express some sense of Slovak identity too. First on the efforts of Slovaks to seek autonomy under Austria-Hungary, but more importantly on the legacy of Great Moravia, a brief-lived post-Roman nation that dominated this part of Europe for a few generations until the arrival of the Magyars and the beginning of Hungary to the south. Forging a collective identity requires identifying a shared heritage.


Back down in the Old City, that identity was being worked out through what seemed to be a weekend of festivals and events. Traditional crafts and trades on display in a thronged main square, traditional dancers hammering the boards on a nearby stage, and Eco- and fitness-festivals further out. It’s probably an accident of the weekend that I was there, but it seemed that this wasn’t really for the sake of tourism. There was engagement and activity everywhere, and a vibrancy that reminded me of Berlin, albeit on a much smaller scale – filling in the gaps of a multipart history and turning it into something whole.

I stayed longer than planned in Bratislava, and I’m glad that I did. Of all the countries that I’ve hit on this trip so far, Slovakia is the one I’d most like to return to. There’s an openness about the people and something very fresh about the culture. And given that Bratislava makes up such a small part of one corner of the nation, there’s bound to be a great deal more to discover. Still, the railroad goes ever on, and I continue to follow it – next up, more Danubian encounters with Budapest and Hungary. 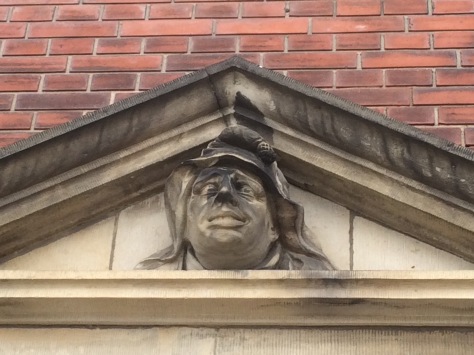 I’ve been devouring Copenhagen in bite-sized pieces over the past few years. Right now, the piece that I’m devouring comes in the form of a ham and cheese toasty in Kobenhaven Airport. As always seems to be the way with the Danish capital, I’m only here on my way to or from somewhere else. Maybe someday I’ll stick around long enough to see some of the country itself. (I’ll spare you the “Aarhus, in the middle of aarstreet” joke I’ve been working on for the last few days.
This time, I was actually here long enough to stay overnight, in the Generator hostel in the heart of the city. After navigating my way through a Friday night crowd that was notably better dressed and less drunk than their Dublin equivalents (they had to be – lots of them were cycling), I made it to a comfy bunk in a dorm room, if not quite so quickly to sleep, due to a combination of music reverberating through the building and snoring from the bunk below.
The day that followed, I decided to focus on Christiansborg Palace, or rather on the ruins underneath it. It’s honestly a bit of a shame that the ramshackle old castle (a model of which is pictured below) was flattened to make way for a Versailles-aping edifice during Denmark’s golden age of trade, in a particularly expensive form of keeping up with the Joneses. In a turn that the Monty Python troupe would have appreciate though, the new palace burned down not once but twice in the next century and a bit. The third one though, that’s stayed up (so far).
Next to the palace are other sights worthy of your time: the delightfully strange Exchange Building, one of whose gargoyle-like decorations can be seen above, and the Thorvaldsen’s Museum, a celebration of Denmark’s greatest Neoclassical sculptors (and of the few nearby buildings to survive the second burning of Christainsborg intact).
Sadly though, it’s another flying visit for me to this city. The airport, Thessaloniki and Greece are calling. This particular odyssey has a long way to go yet.